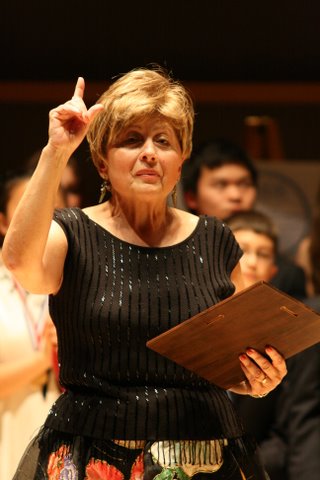 What do you do when you arrive in a foreign country with two kids, no job, and $17 to your name?  Well, if you happen to be an accomplished pianist with an endless passion for bringing the gift of music to all who want it, you do what Nelly Berman did: establish a music school.

Born into a prominent family in Odessa, Russia, Mrs. Berman, the daughter of a doctor, would see her family’s fortunes change dramatically when her father died young and her mother was not permitted to continue in medical school because the family was Jewish. Through this turmoil, Nelly would be encouraged to pursue music in her life, a last wish of her father, and by the time she was 10, the sacrifices that her mother and family had made brought her to a prestigious Russian conservatory, where her exceptional talent was discovered.  She continued to work hard and developed a career as a piano teacher, but due to the repressive atmosphere of the former Soviet Union, she wanted more for herself and her children.  She made a difficult decision to leave her home and career and move to the United States.  At the age of 36, she arrived in New Orleans in 1976 with her Daughter Elena, then 11 and son Dima, then 15.  Approximately two years later, the Berman family moved to Philadelphia in order to give her daughter Elena, an accomplished pianist as well, the chance to pursue promising opportunities.  Though initially working in Philadelphia as an interpreter for the Jewish Family Service of the Jewish Federation of Greater Philadelphia, she soon began what would be the foundation for the Nelly Berman School of Music.

In 1983, with the help of friends and family, Mrs. Berman was able to purchase a small home in Overbrook Park where she taught a handful of students.  Word spread quickly of here uniquely effective teaching abilities and she soon expanded the school onto the campus of  the Agnes Irwin School in 1991.  In 1997, the school was expanded further into a large home in Haverford, which is now the central location for the school.  Currently the school is home to over 400 students with a faculty of over 45 and provides lesson on all instruments to all ages. The School is based on the Russian method of teaching ,which the school has become famous for.  Far more than the standard teaching practices in America, the Nelly Berman School focuses on performance through a thorough understanding of the music beyond the page and considers the composer’s emotional intent in the music.  This approach has taken students of the school to performances at Carnegie Hall and with the Philadelphia Orchestra.  In addition, many have earned prizes in multiple competitions as well as appearances performing at the White House, on NBC’s “Today Show”, and on NPR’s “From the Top”.