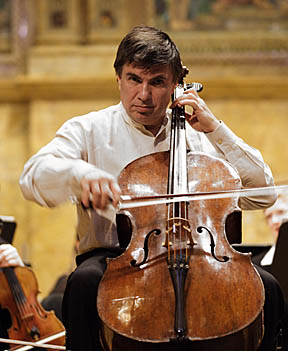 Jeffrey Solow’s impassioned and compelling cello playing has enthralled audiences throughout the United States, Europe, Latin America and Asia. His multi-faceted career embraces performances as recitalist, soloist with orchestra and chamber musician, as well as teaching, writing and lecturing on a variety of cellistic topics and arranging and editing music for the cello. Two of his many recordings were nominated for Grammy Awards.

Mr. Solow’s concerto appearances include performances of more than forty different works with orchestras including the Los Angeles Philharmonic (on subscription series and at the Hollywood Bowl), the Japan Philharmonic, Seattle Symphony, Milwaukee Symphony, Los Angeles Chamber Orchestra, and the American Symphony (with whom he also recorded). He has presented recitals throughout the US and in Europe, Japan, Korea, China, Central and South America and has been guest artist at many national and international chamber music festivals.

In addition to performing, Jeffrey Solow is a regular contributor to Strad magazine (London), Strings magazine and American String Teacher and is editor of The Violoncello Society Newsletter (NY). A noted authority on healthy and efficient string playing, he is frequently invited to give lectures and presentations on the subject. His wide-ranging interests include scuba diving and underwater photography, protozoology and paleontology and he graduated with a degree in Philosophy magna cum laude and Phi Beta Kappa from UCLA. These attainments as well as his knowledge in many fields outside of classical music give him an exceptional ability to communicate with audiences of all ages and all levels of musical sophistication, both musically and in personal interaction.

Recognized worldwide as an outstanding teacher, Jeffrey Solow has presented master classes throughout the United States as well as in Canada, Europe, Asia and South America and he is professor of cello and chamber music at Temple University’s Esther Boyer College of Music and Dance. Mr. Solow has served as president of ASTA—the American String Teachers Association—and he is the president of the Violoncello Society, Inc. in New York, the nation’s second oldest cello society.