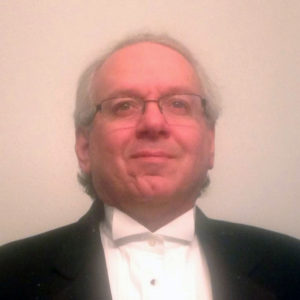 Frank Stroble has been a fixture of the Delaware Valley music scene for over 30 years as a performer, teacher, arranger and composer. Upon earning B.S. in Music Education from Mansfield University of Pennsylvania, he wandered in the wilds of Pennsylvania and Delaware before eventually settling in Voorhees, NJ, where he now resides. He’s one of the founding members of the Philharmonic of Southern New Jersey, and has served two terms as Assistant Conductor of the Wind Symphony of Southern New Jersey. Frank has accompanied such noted performers as Ella Fitzgerald, Paul Warfield, Barbara Nissman, Leon Bates, Richard Stolzman, Lionel Hampton, Jr., Stanley Clarke, Joshua Roman, Storm Large and Caleb Collins.

Frank has been teaching high school and college students for over 30 year, specializing in embouchure building, technique improvement, musicianship and overcoming “nerves.” Using Caruso Calisthenics for the French Horn (as practiced by Julie Landsman), Frank builds the student’s embouchure, in coordination with proper breathing, from the ground up, to ensure that beautiful tone and full support are maintained throughout all ranges of the horn. Once the embouchure is in place, the student will learn fundamentals of technique and how to practice on their own, with the help of Canconne, Kopprasch and Maxime-Alphonse. Upon mastering the basics of technique, the student will move on to the learning the fundamental repertoire of French Horn solo, orchestral and wind ensemble literature. Frank specializes in preparing the student for all-State and college auditions, and uses creative visualization and other techniques to help the student overcome stage fright and and any other psychological barriers.