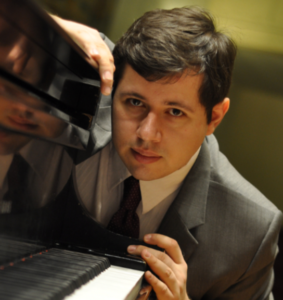 With “a special ability to present touching interpretations” (El Norte), Brazilian pianist RONALDO ROLIM is a prominent figure among the newest generation of outstanding musicians. Acclaimed for his “consummate elegance” (New York Concert Review) and “mastery of phrasing, agogic accents, and dynamics” (Oberbaselbieter Zeitung), he has performed extensively over four continents, and in such venues such as Carnegie Hall, Zurich’s Tonhalle, London’s Wigmore Hall, the Great Hall of the Liszt Academy in Budapest, and Beijing’s National Centre for the Performing Arts. He is a winner of Astral’s 2017 National Auditions.

In the 2017-2018 season, Mr. Rolim is featured in a celebration of the 150th anniversary of the birth of Enrique Granados, with performances of the composer’s complete Goyescas at various venues in the U.S., Europe, and Brazil. Recent guest soloist performances include Brahms’ Concerto No. 1 with the Symphony Orchestra of the St. Petersburg State Academic Capella, Debussy’s Fantaisie with the Minas Gerais Philharmonic in Brazil, and a German tour of Beethoven’s Concerto No. 5 with Ukraine’s Lviv Philharmonic Orchestra. He has captured top prizes at numerous international competitions, including the James Mottram, Bösendorfer, San Marino, Lyon, Teresa Carreño, and the prestigious Concours Géza Anda in Zurich. A passionate advocate of chamber music, Mr. Rolim is the founding member of Trio Appassionata, formed in 2007 with violinist Lydia Chernicoff and cellist Andrea Casarrubios. Some of the ensemble’s most recent projects include tours of Brazil and China, and the release of its debut album gone into night are all the eyes, for Odradek Records. Featuring piano trios by American composers, Gramophone said the disc “deserves automatic respect”, presenting “music-making as impressive and dangerous as a granite cliff” (International Record Review). Mr. Rolim greatly enjoys working with diverse chamber musicians and has performed with the Jasper, Aizuri and São Paulo string quartets, and members of Ensemble Connect, the Baltimore Symphony, the Brazilian Symphony, and Bronx Arts Ensemble.

Mr. Rolim’s performances have been featured in radio broadcasts in Brazil (Radios MEC and Cultura), the U.S. (Spokane Public Radio and WBJC Baltimore), and Europe (Radios SWR 2, BBC 3, Rai 3, and France Musique). He has also been featured in several television programs in his home country, including Brasil Piano Solo, a series of recitals dedicated exclusively to Brazilian music, presented by the TV Cultura Channel. He has also participated in the documentary Magda Tagliaferro: A World Inside The Piano, in which he performed music of Scriabin.