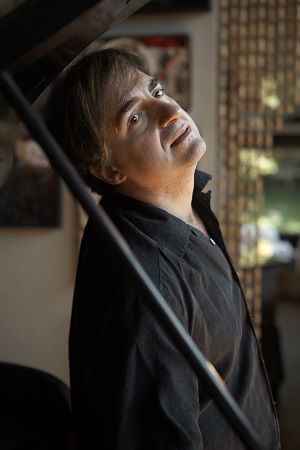 Having impressed audiences worldwide with his fiery performances and distinctive interpretations, Maxim Mogilevsky made his debut at age thirteen with the Moscow Philharmonic Orchestra and Dmitri Kitayenko to widespread acclaim. Since then he has gone on to perform as a soloist with major orchestras around the world, and undertaken many unique artistic projects. Called by The Washington Post “…a pianist with distinctive personality, outstanding technique, and an inclination to stamp his own imprint on whatever he plays,” Mogilevsky has become a favorite of musicians and audiences worldwide.

Along with recital performances on five continents, Mogilevsky’s notable appearances include those at Carnegie Hall, Lincoln Center, the Kravis Center, and Segerstrom Center for the Arts, Lincoln Theater, Jordan Hall, as well as at the Salzburg, Edinburgh, Ravinia, Ruhr Klavier and Spoleto Festivals.

Mogilevsky’s New York debut in December 2007 was with Mariinsky Orchestra and Maestro Valery Gergiev at Carnegie Hall and in May 2010 with the New York Philharmonic and Gergiev. Recent activities include a two-month-long tour of South America with the St. Petersburg State Symphony, a collaborative project with four ballerinas from the Mariinsky Ballet performing Tchaikovsky’s “The Seasons”, and recitals in Los Angeles, Miami, Tokyo and Paris. Maxim opened Martha Argerich’s “Progetto” Festival in Lugano with a recital in 2013. This year, Mogilevsky performed with Yuri Bashmet and the Moscow Soloists at the Bashmet International Academy and Festival in Samara, Russia. He will be the featured soloist with the State Academic Orchestra of Russia (GASO) during their 2018 tour of Asia, with performances in Korea, China, and Hong Kong.

In the summer of 2015 Mogilevsky organized a piano institute together with the Lang Lang Music World at The Summit Music Festival in New York. Later in August 2015 directed a workshop in cooperation with the Beijing Central Conservatory and German Goethe Institute in Boston, MA. Last year Mogilevsky organized a Shostakovich Festival and a Teaching Academy at the China Conservatory in Beijing.

In addition to his performing career, Mogilevsky holds the post of Distinguished Professor and Director of the Piano Program at Suzhou University of Science and Technology in Suzhou, Shanghai region, China. He is also an artistic advisor to the Jiangsu Center for the Performing Arts, China. When not travelling, he resides in China, Russia, Europe and the United States.