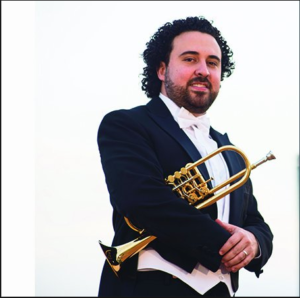 Andres Gonzalez Parra is one of the young talents of the Venezuelan orchestral conduction emerged from the renowned social and musical program known as El Sistema. In 2013; Gonzalez Parra, who was trained in conduction by masters Mario Benzecry and Jose Antonio Abreu, founder of El Sistema; created the Jose Francisco del Castillo Youth Symphony Orchestra, with which he performed several symphonic and choral repertoires, such as Symphony No. 2 by Gustav Mahler in July 2015. In July 2016, he debuts at an international level as guest conductor of the Youth Philharmonic Orchestra of the Biennial Festival in the province of Chaco, Argentina.

From an early age, he has devoted most of his musical career to the academic education of Venezuelan children and young musicians, acting as teacher, orchestra conductor, and academic project developer; always committed to the deep progress of culture through communities. Since 2004, he is a trumpet player member of the Simon Bolivar Symphony Orchestra, conducted by master Gustavo Dudamel, with whom he has performed in the most important concert halls worldwide, such as the Berliner Philharmonie Hall, the Carnegie Hall in New York, the Munich Philharmonie Hall, the National Grand Theater of China, the Municipal Theater of São Paulo, the Columbus Theater in Buenos Aires, the Disney Concert Hall in Los Angeles, among others.

Throughout his education as trumpet player, he has benefited from the training by masters Rolf Smedvig, Vladimir Kafelnikov, Thomas Clamor, Marc Reese, Rafael Zambrano, Eduardo Manzanilla, Jairo Hernandez, Max Sommerhalder, Lukas Beno, Gabor Taerkovi, among others. Also, as a musician of the Simon Bolivar Symphony Orchestra, he has participated in the Salzburg and Lucerne Festivals. He has been conducted by masters Claudio Abbado, Simon Rattle, and Lorin Mazel; and has been a part of the recordings of the Venezuelan orchestra, under the Deutsche Grammophon and Euro Arts record label.

In 2010, he founded the Caracas Brass Ensemble. He is a member of the Simon Bolivar Trumpet Ensemble. He has recently completed his studies in the Atlantic Coast International Conducting Academy in Portugal with masters Luis Clemente and Colin Metters from the Royal Conservatory of Music in London. He began his musical studies at the age of 2 in the Jacinto Lara Conservatory. At only 3 years old, he raised the baton for the first time to conduct Ode to Joy along the Children’s Orchestra and Choir of the Lara State. At the age of 8, he starts his studies as trumpet player, having Leonardo Mendez, Alfredo D’Addona, and Gary Nuñez as teachers. At the same time, he studies orchestral conduction with professors Libia D’Addona and Tarcisio Barreto.

In 1994, he is selected to be a member of the trumpet section of the National Children’s Symphony Orchestra of Venezuela, with which he also performs as Guest Conductor and goes on a tour around Europe, the Americas, and Asia.